The whole province of Khurásán was in those days [1848] in the throes of a violent agitation. The activities which Quddús and Mullá Husayn had initiated, their zeal, their courage, their outspoken language, had aroused the people from their lethargy, had kindled in the hearts of some the noblest sentiments of faith and devotion, and had provoked in the breasts of others the instincts of passionate fanaticism and malice. A multitude of seekers constantly poured from every direction into Mashhad, eagerly sought the residence of Mullá Husayn, and through him were ushered into the presence of Quddús.

Their numbers soon swelled to such proportions as to excite the apprehension of the authorities. The chief constable viewed with concern and dismay the crowds of agitated people who streamed unceasingly into every quarter of the holy City [Mashhad]. In his desire to assert his rights, intimidate Mullá Husayn, and induce him to curtail the scope of his activities, he issued orders to arrest immediately the latter’s special attendant, whose name was Hasan, and subject him to cruel and shameful treatment. They pierced his nose, passed a cord through the incision, and with this halter led and paraded him through the streets. 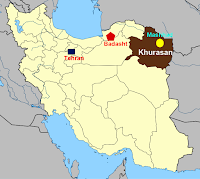 Mullá Husayn was in the presence of Quddús when the news of the disgraceful affliction that had befallen his servant reached him. Fearing lest this sad intelligence might grieve the heart of his beloved chief, he arose and quietly retired. His companions soon gathered round him, expressed their indignation at this outrageous assault upon so innocent a follower of their Faith, and urged him to avenge the insult. Mullá Husayn tried to appease their anger. “Let not,” he pleaded, “the indignity that has befallen Hasan afflict and disturb you, for Husayn is still with you and will safely deliver him back into your hands to-morrow.”
Read more »