Baha’u’llah shows kindness to an elderly woman in Baghdad

Every day Baha'u'llah walked to the coffeehouses near the bridge of the boats [in Baghdad]. Each day an elderly woman stood alongside the road and waited for Him to pass. She was poor and lived in a broken-down house. Baha'u'llah stopped each day and spoke kindly to the woman. He would inquire after her health, then give her a little money.

Each day the elderly woman would kiss Baha’u’llah’s hands to show her thanks, but sometimes she wanted to kiss His face. She was rather short and could not quite reach, so Baha'u'llah would bend down to let her kiss Him on the cheek ‘She knows that I like her,' Baha'u'llah would tell His companions, ‘that is why she likes Me.’ (Baha’u’llah, quoted by Balyuzi, Baha’u’llah: King of Glory, p. 151) (Druzelle Cederquist, The Story of Baha’u’llah, p. 159) 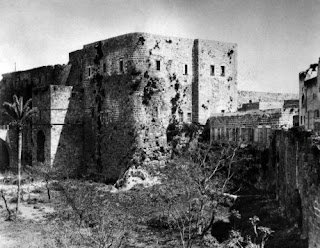 I write this by a window that looks across an orange garden to the slopes of Mount Carmel, which rises almost abruptly beyond the red-roofed houses of the German colony. The “Mount of God” is but a hill in comparison with the mighty Alps, yet how great is its fascination, how beautiful it appears now in the moonlight! From time immemorial it has been the home of the prophets. It is here that ‘Abdu’l-Baha dwells today, and the simple Germans who left their native land to await "the second coming" of their Lord upon this mountain, are his neighbors! In my ears is the sound of the sea, for the blue Mediterranean laps the shores of Carmel, and across the bay Akka gleams white in the moonlight. “The Great Prison” it was called when Baha’u’llah dwelt there, a prisoner in a penal city. But a blessing surely rests upon it now, for the sun seems ever to shine there when the sea and the sky are grey. The soil upon which its houses are built has been many times soaked in blood. Christian and Saracen massacred one another there in turn. Many prisoners have languished there since Napoleon's pride was humbled by his failure to take "the petty town" which yet he designated "the key to the East.''