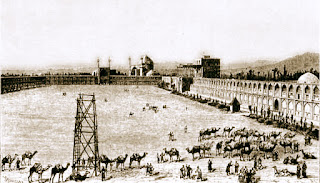 Before Mulla Husayn met the Báb and became His first believer, he was a disciple of Siyyid Kázim, one of the two forerunners of the Báb – the other was Siyyid Kázim’s teacher, Shaykh Ahmad.

The passing of his beloved master, Shaykh Ahmad, brought unspeakable sorrow to the heart of Siyyid Kázim, who was his appointed successor. Inspired by the verse of the Qur’án, “Fain would they put out God’s light with their mouths; but God only desireth to perfect His light, albeit the infidels abhor it,” Siyyid Kázim arose with unswerving purpose to consummate the task with which his master Shaykh Ahmad had entrusted him. He found himself, after the removal of so distinguished a protector, a victim of the slanderous tongues and unrelenting enmity of the people around him. They attacked his person, scorned his teachings, and reviled his name.

At the instigation of a powerful and notorious shí’ah leader in Karbilá, Iraq, the enemies of Siyyid Kázim leagued together, and determined to destroy him. Thereupon Siyyid Kázim conceived the plan of securing the support and good will of one of the most formidable and outstanding ecclesiastical dignitaries of Persia who lived in the city of Isfáhán and whose authority extended far beyond the confines of that city. This friendship and sympathy, Siyyid Kázim thought, would enable him to pursue unhampered the course of his activities, and would considerably enhance the influence which he exercised over his disciples.
Read more »