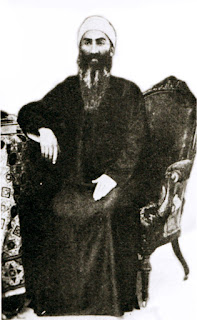 In Badasht there was a field with a stream running through it and gardens to either side. Quddús remained concealed in one of the gardens, and Táhirih resided in the other. A tent had been pitched for Bahá’u’lláh on that field, and the other believers were also housed in tents erected on the same field. In the evenings Bahá’u’lláh, Quddús, and Táhirih would meet. Bahá’u’lláh made a solemn agreement with them that the truth of the Cause would be proclaimed at Badasht, but no specific day was designated.

Then, by chance, Bahá’u’lláh fell ill. As soon as he was informed, Quddús emerged from his concealment and entered Bahá’u’lláh’s tent. Táhirih sent a message saying: “Either bring Bahá’u’lláh to the garden where I reside or I will come myself.” Quddús said: “Bahá’u’lláh is unwell and cannot come”, which was a signal. Táhirih, seizing upon the opportunity, arose and, unveiled, came forth from the garden. She proceeded towards the tent of Bahá’u’lláh crying out and proclaiming: “I am the Trumpet-blast; I am the Bugle-call!”—which are two of the signs of the Day of Resurrection mentioned in the Qur’án. Calling out in this fashion, she entered the tent of Bahá’u’lláh. No sooner had she entered than Bahá’u’lláh instructed the believers to recite the Súrih of the Event from the Qur’án, a Súrih that describes the upheaval of the Day of Resurrection.