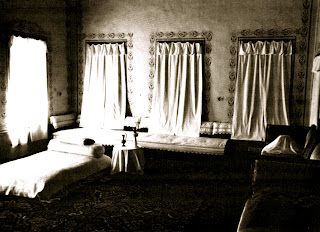 'Abdu'l-Baha had been in America less than a month when He took one of most historic actions of His entire journey.

The site of the Baha’i House of Worship in Wilmette, Illinois, the 'holiest House of Worship ever to be raised in the Name of Baha’u’llah’, was barren land on that chill, windy May day when 'Abdu'l-Baha, with His own hands, laid the comer-stone of that prototype edifice that would sooner or later change the face of human society.

The Baha'is of America were gathered at a Convention in Chicago just preceding that great event. Lua was addressing an assembled crowd of over a thousand. She had just returned from a triumphant teaching tour in California.

Lua's visit to California had been successful beyond all expectation, yet Lua was never fully aware of the influence she had on others. Her heart was always anchored in her love for 'Abdu'l-Baha – results she left to God and to the future.

Her presence in San Francisco in 1911, just preceding 'Abdu'l-Baha's visit to America, had been of great importance to another Baha'i, John Hyde Dunn. He has often told how he sought Lua out on every occasion for a private interview. She gave him generously of her time. No doubt one of Lua's 'inner promptings' told her that this was one of 'Abdu'l-Baha’s 'lost jewels'. Hyde Dunn, with his wife, Clara, would in a few years sail away to the Antipodes and open up the entire continent of Australia to the Baha’i Faith.