The sifter of wheat in Isfahan 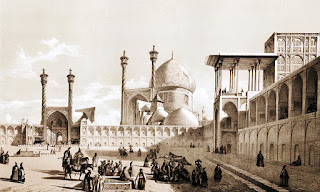 At the time of the Báb, Isfahan, a central city in Persia, was known among cities for the great learning of its clergy. However, the first to embrace the Cause of the Báb in that city was a man, a sifter of wheat, who, as soon as the Call reached his ears, unreservedly accepted the Message.

His name was Mulla Muhammad Ja'far Gandum-Pak-Kun. He is mentioned in the Persian Bayan and praised as one who "donned the robe of discipleship".

With marvelous devotion he served Mulla Husayn, and through his close association with him became a zealous advocate of the new Revelation.

A few years later, when the soul-stirring details of the siege of the fort of Shaykh Tabarsi were recounted to him, he felt an irresistible impulse to throw in his lot with those heroic companions of the Báb who had risen for the defense of their Faith. Carrying his sieve in his hand, he immediately arose and set out to reach the scene of that memorable encounter. He joined the company of the defenders of the Fort of Shaykh Tabarsi and perished during that siege.

"Why leave so hurriedly?" his friends asked him, as they saw him running in a state of intense excitement through the bazaars of Isfahan.

"I have arisen," he replied, "to join the glorious company of the defenders of the fort of Shaykh Tabarsi! With this sieve which I carry with me, I intend to sift the people in every city through which I pass. Whomsoever I find ready to espouse the Cause I have embraced, I will ask to join me and hasten forthwith to the field of martyrdom."
Read more »