About nine miles from Fort Tabarsi, where Baha’u’llah had planned to join the heroic believers, He and His companions were arrested by the soldiers of the acting governor of the area and taken to the town of Ámul, Mazindran in northern Iran.

The hostile clerics of Ámul had created a major commotion in the town. Having Baha’u’llah and His companions in their midst, the situation was further exacerbated by the divines calling upon the people to protect their religion by demanding severe punishment upon the captives – including murder. People were told to come to the mosque, fully armed -- the butcher with his axe, the carpenter with his hatchet – prepared to make a rush at Baha'u'llah and murder Him. The divines of Ámul were particularly marked for their rapacity.

The Acting Governor realized that any indulgence on his part would be fraught with personal danger. By inflicting a befitting punishment upon the captives, he sought to check the mob’s passions. He ordered punishment by bastinado - a form of torture that involves being beaten on the soles of the feet with a rod. He also promised that the captives would be kept in custody following this punishment until the return of the governor. 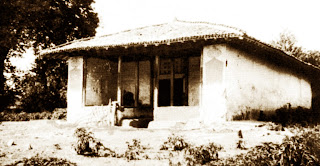 Meanwhile, news of the situation facing Mulla Husayn and his 300 plus companions reached Baha’u’llah who was staying at his ancestral home of Nur. He learned how, because of the treachery and broken pledges of the authorities in Sari and Barburush, they had been forced to use arms to defend themselves, and had hurriedly thrown up a wall and built a fortress around the mausoleum of Shaykh Tabarsi and were now beleaguered within it. Baha'u'llah decided to visit them and when His preparations were complete, travelled to the village of Afra [located in the vicinity of the shrine of Shaykh Tabarsi], which belonged to a certain Nazar-'Ali Khan. When He arrived in Afra, He ordered for a sumptuous dinner to be prepared for the inmates of the fortress and sent one of the believers to inform them of His impending arrival.
Read more »