'Abdu’l-Bahá relates a story as a metaphor

In ancient times there was a King who arranged a contest between his Chinese and Roman artists. He appointed a large hall in which both groups could paint. The Chinese artists asked for a curtain to be hung in the middle of the hall so that their competitor could not see what they are working on. The Chinese artists then worked steadily for six months, day and night. The Roman artists, on the other hand, did nothing. As a result, everybody thought that the Roman artists were going to lose the contest. Just a few days before the King was scheduled to judge the two groups and award the winner, the Roman artists set out to build a wall behind the curtain that separated them from the Chinese artists and polished it so well that it became like a mirror. When the time came to judge the final results, the King's ministers and courtiers went first to the Chinese section to see what they had been working so hard for six months. They were very impressed by their marvelous and beautiful painting! Wanting to see the Roman section they pulled the curtain and found a wall that was so polished that it fully reflected the paintings drawn by the Chinese artists – it was as if the paintings were actually in the wall! The King was so amused by their creativity that He awarded them the prize.

After relating this story the Master said that He hoped that our hearts would similarly become as pure and as transparent so that the pictures and images of the Kingdom of Abha would be reflected therein.
(Adapted from ‘Abdu’l-Baha in Edinburgh – Sohrab’s Diary Letters’, by Ahmad Sohrab)

It was the end of June, 1848. Outside the village of Badasht, located about 400 Km northeast of Tehran, Persia, on the other side of the Elburz Mountains in the Province of Semnan, there was a great open field that contained some gardens and a stream that flew through its center. 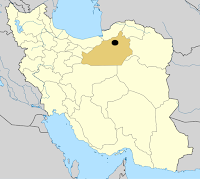 Warm breezes rustled the leaves of trees whose fruits would slowly ripen into peaches and pomegranates, cherries and apples-plump, juicy, and sweet. Amidst these pleasant surroundings Baha’u’llah had rented three gardens. One was assigned to Quddus, but according to ‘Abdu’l-Baha that “was kept a secret.” Another was set apart for Tahirih, and in a third was raised the pavilion of Bahá'u'lláh.  In each of the three gardens was a tent spread with soft carpets large enough for guests to gather.

There, near the gentle ripple and splash of a stream, with the mountains tall and purple in the distance, tents were pitched for the eighty-one Bábis who attended what would become later known as the Conference of Badasht. These disciples who had gathered from various provinces were Baha’u’llah’s guests from the day of their arrival to the day they dispersed. Tahirih was the only woman present among them. Mulla Husayn was unavoidably absent, since he had been detained by authorities in Mashhad.
Read more »