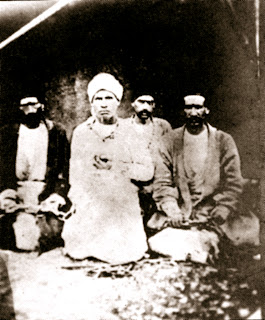 In 1869 Aqá Buzurg arrived at the prison city of 'Akka, disguised as an Arab. He handed his written declarationof faith to 'Abdu'l-Bahá, who greeted him warmly and took him to the barracks cell. There he attained the Goal of his desire. Twice he conversed privately with Bahá’u’lláh, Who gave him a new name: Badí’ (Wonderful).

For more than two years after writing His Tablet to the Shah, the Blessed Beauty had been waiting for a devoted soul to arise and carry it to the ruler of Persia. The reborn Badí’ ended His waiting. Haji Shah Muhammad Amin, Bahá’u’lláh 's Trustee, brought the youth a small case and the Tablet, and has left this account of their meeting:

". . . we left the town and walked up Mount Camel where I handed him the case. He took it into his hands, kissed it, and knelt with his forehead to the ground; he also took the sealed envelope, walked twenty to thirty paces away from me, sat down facing 'Akka, read it, and again knelt with his forehead to the ground. The rays of ecstasy and the signs of gladness and joy appeared on his face. . . .

I mentioned that we had better go to Haifa, in order that, as instructed, I might give him some money. He declined to go with me, but suggested that I could go alone and bring it to him.